Hey Everyone! Molly here!
So, my husband and I randomly decided to go to Savannah when I got home on Sunday. So on Monday, we booked a room and drove the three hours. We both really needed to get away. I wanted to keep from getting burned out on shooting with wedding season really starting to go full speed. I actually didn’t take my camera with me. I know, please don’t be mad at me. Who goes to a beautiful city without a camera?! But when I came home on Sunday I was SO tired that I didn’t unload and double backup the cards, so when we left early on Monday, I stuck them in the fireproof box…because I’m paranoid like that. Sometimes I feel like I’m so busy trying to take a beautiful photo that I feel like I’m letting the other beautiful things go unnoticed. That, and I wanted to spend all my time with my husband, not my “other love”. So we went just for the day/night/today. We had fun, ate steak, went on a ghost tour, walked A LOT, drove a lot, and unsuccessfully shopped at an outlet mall. All in all, a successful trip!
Meanwhile, Cristina is taking some time off too, to go visit a few of our friends from college. I think she is in Atlanta, now. I’m sure she’s having a blast!

In other news:
People keep asking me about Peyton’s eyes. I have gotten “have you enhanced his eye color?” ” did you add a star/ sparkle to his eyes?” things like that. No, I didn’t enhance his eye color, or his lashes. He’s just naturally beautiful. I sometimes DO sharpen people’s eyes in adobe photoshop (cs2) in post. Here’s how I do it. First, I color correct/ do other edits. Then I make a duplicate copy of that layer by dragging it to the new layer icon. On the top layer, I select the area around the eyes , and sometimes lips (not teeth!), and feather by about 15 pixels (on a 15 mb photo). Then I go to filters, sharpen, unsharpen mask. I play with that until I have decided to go a little overboard. Then I let it process, and reduce the opacity on the top layer until I can see barely noticeable changes to the eyes. I think that’s what brings out some sparkle. However, people should keep in mind that babies and kids (usually 5 and under) have wonderfully reflective eyes, anyway. I don’t know what it is, but it’s kind of ironic that it dwindles as we get older, huh?
But that’s it. That’s the sparkle technique, i guess. It sounds like a lot of steps, but it’s SUPER easy.

Before I go, I’ll leave you with a picture from our trip taken by my husband on his cell phone.
It is a gravestone from the cemetery in historic Savannah. Apparently when Sherman’s soldiers camped in the cemetery during the civil war, they got bored, silly, and probably drunk, and decided to deface gravestones. TJ and I found this one particularly humorous. Read it carefully, and if you can’t figure it out, keep reading… 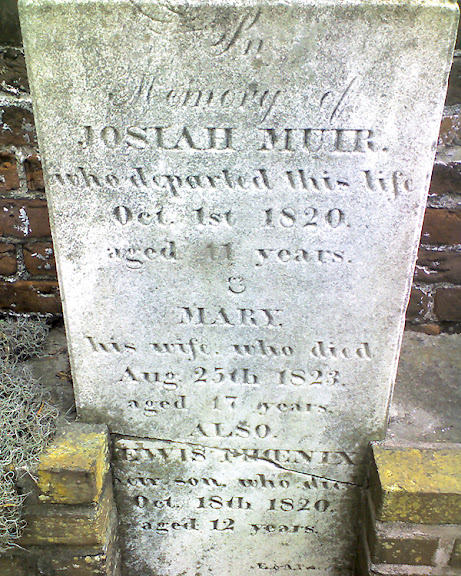